Nusinersen in SMA: indication of major added benefit in children with early-onset disease 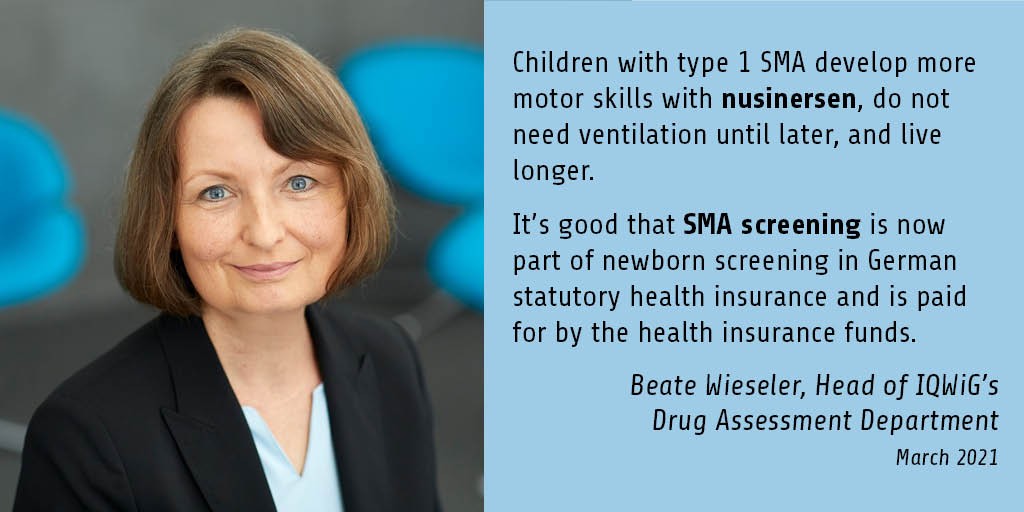 The drug nusinersen is approved for the treatment of 5q spinal muscular atrophy (SMA). The German Institute for Quality and Efficiency in Health Care (IQWiG) has now examined in an early benefit assessment whether the drug offers an added benefit for patients in comparison with the appropriate comparator therapy.

SMA leads to the progressive death of certain nerve cells in the spinal cord that are responsible for muscle movement. Without these nerve cells, the muscles receive no movement signal, remain unused and become weak. This impairs a child’s motor development. The cause of 5q spinal muscular atrophy is a change in the genetic information on the “survival motor neuron” (SMN1) gene. It is located on the longer arm, the so-called q-arm, of the 5th chromosome – hence the abbreviation “5q”. There are different forms of 5q spinal muscular atrophy:

In the therapeutic indication, children with early onset of disease (SMA type 1) can be distinguished from those with later onset (SMA type 2, type 3 and type 4). In addition, the group of pre-symptomatic children diagnosed during SMA newborn screening forms an important third patient group.

The derivation of the added benefit for children with early onset of disease (SMA type 1) is based on data from the ENDEAR study, a randomized controlled trial (RCT) in patients with genetic documentation of 5q SMA who were younger than six months of age at symptom onset, and who had no more than two SMN2 gene copies. The study overall provides an indication of a major added benefit. In order to achieve an advantage in overall survival, it is particularly crucial that children with early symptom onset (age: under 12 weeks) are treated with nusinersen. In order to achieve progress in symptoms (achievement of motor milestones and permanent ventilation), it is important that treatment with nusinersen is initiated as early as possible after symptom onset.

As the manufacturer did not provide any relevant data for the assessment of the added benefit of nusinersen in comparison with BSC in children with later onset of disease (type 2, type 3 and type 4), an added benefit for this patient group is not proven.

For pre-symptomatic children with 5q SMA, there are no RCTs of direct comparison between nusinersen and the appropriate comparator therapy BSC or a corresponding indirect comparison based on RCTs. However, under certain circumstances, a transfer of evidence from one population to another (without sufficient data) is possible. The IQWiG project team considered these circumstances to be present here and therefore transferred the added benefit from the ENDEAR study for children with early onset of disease to pre-symptomatic patients (each with two SMN2 gene copies). Due to the associated greater uncertainty of the assessment, there is no indication, but a hint of a non-quantifiable added benefit of nusinersen in comparison with BSC for this patient group.

Progress in the treatment of SMA

Beate Wieseler, Head of IQWiG’s Drug Assessment Department, summarizes the results of the early benefit assessment: “Children with type 1 SMA develop more motor skills with nusinersen, do not need ventilation until later, and live longer. That’s why it’s good that SMA screening has recently become part of newborn screening in German statutory health insurance and is paid for by health insurance funds."

The dossier assessment is part of the early benefit assessment according to the Act on the Reform of the Market for Medicinal Products (AMNOG) supervised by the G-BA. After publication of the dossier assessment, the G-BA conducts a commenting procedure and makes a final decision on the extent of the added benefit.

More English-language information will be available soon (Sections 2.1 to 2.6 of the dossier assessment as well as easily understandable information on informedhealth.org). If you would like to be informed when these documents are available, please send an e-mail to info@iqwig.de.