Drugs for rare diseases should also undergo a regular benefit assessment procedure at market entry. This is shown by a current IQWiG analysis. 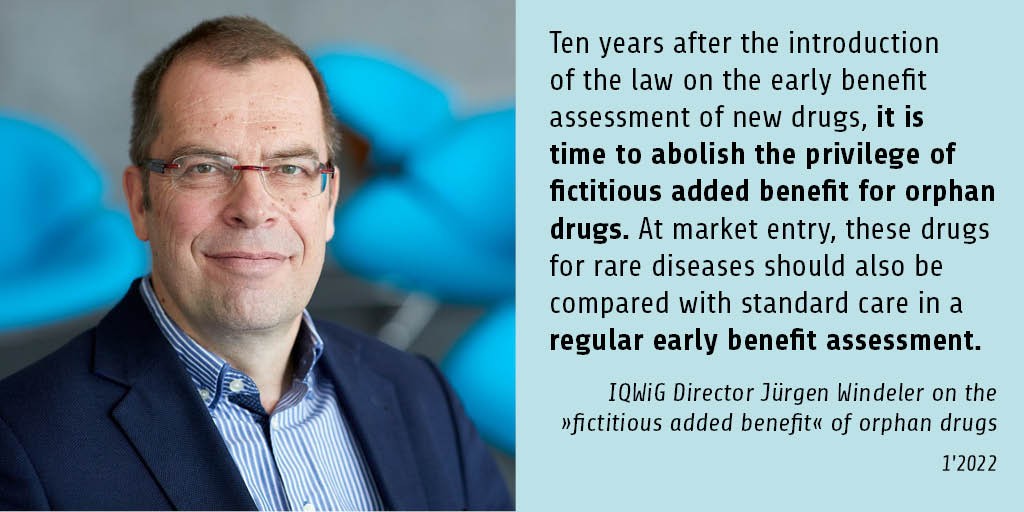 In order to promote the development of drugs for rare diseases (orphan drugs) despite market risks, in Germany they are exempt from the regular benefit assessment procedure introduced in 2011 with the Act on the Reform of the Market for Medicinal Products (AMNOG). Instead, an added benefit is assumed to be proven for orphan drugs at the time of European approval and subsequent market access (§35a German Social Code Book [SGB] V) – regardless of the actual evidence available. The Federal Joint Committee (G-BA) can only quantify the added benefit of a new drug based on the evidence submitted by the drug manufacturer. If no classification into the categories "minor", "considerable" or "major" is possible, it must certify a "non-quantifiable" added benefit for the drug, which has been referred to as a "fictitious" added benefit. A regular benefit assessment by the Institute for Quality and Efficiency in Health Care (IQWiG) and the is only conducted when the drug exceeds an annual revenue threshold of 50 million euro.

For all orphan drugs that have undergone a regular benefit assessment procedure since 2011 due to the exceedance of the above threshold, IQWiG has now analysed whether the fictitious added benefit initially specified was still valid, and thus whether the previous preferential handling of these drugs in the benefit assessment was justified.

Result: The specification of a fictitious added benefit upon market access of orphan drugs was not confirmed in more than half of the cases. The decisive factor was generally that standard care (called “appropriate comparator therapy”) was not used as a control until the time of the regular benefit assessment, i.e. it could only be assessed at this point whether a real added benefit existed.

Thomas Kaiser, Head of IQWiG's Drug Assessment Department emphasizes, "This has consequences for the quality of patient care. In these cases, new drugs are prescribed preferentially, without a data basis. Patients then may have a lot of hope pinned on a new drug for which it only becomes clear years later that there is no proof at all of superiority over the existing treatment options."

Kaiser also explains: “In addition, the general fictitious added benefit prevents a distinction from being made between orphan drugs with and without real progress for patient care. A key goal of AMNOG, namely to separate the wheat from the chaff, is thus not achieved for orphan drugs."

The analysis shows that in 22 of the 41 assessments (54%), no added benefit ("not proven") could be determined in the regular benefit assessment.

In addition, further analyses by IQWiG show that the classification of added benefit is usually only corrected after some years: For the 22 research questions without proof of added benefit, the period between the limited and the regular benefit assessment was on average a good 3 years (range: 1 to 9 years). In some cases, however, the classification of added benefit is not corrected at all: This is the case if the revenue threshold of 50 million euro is not exceeded for the orphan drug and a regular benefit assessment is therefore not conducted.

IQWiG Director Jürgen Windeler notes: "Our analysis proves a misguided approach to orphan drug assessments. If in a good half of the cases in which orphan drugs underwent a regular benefit assessment, the added benefit originally specified is not confirmed, and orphan drugs representing real added value can no longer be identified as such from the outset, there is a need for action. Ten years after the introduction of AMNOG, it is therefore time to abolish the privilege of fictitious added benefit for orphan drugs! Orphan drugs should also be compared with the appropriate comparator therapy in a regular early benefit assessment conducted by IQWiG and the at market entry."

The misguided approach to orphan drug assessments not only affects patient care, but also drug expenditure by the health insurance funds. This is because, according to the “Drug Compass 2021” published by the Scientific Institute of Germany’s largest statutory health insurance (SHI) fund, the AOK, orphan drugs for very specific types of cancer are major cost drivers in the SHI system. The high prices may be justified for orphan drugs representing real progress for patient care, but not for those without an added benefit. Windeler emphasizes: "For several reasons, a careful distinction is therefore sensible and overdue."

The present report was prepared in the form of a working paper within the general commission awarded to IQWiG by the in December 2004 in order to strengthen the Institute's scientific independence. The general commission enables IQWiG to select scientific projects independently. In contrast to other types of reports, there are no deadlines for the publication of working papers. The working paper "Evidence on orphan drugs" was sent to the on 23 December 2021.