Larotrectinib in tumours with NTRK gene fusion: Data are not yet sufficient for derivation of an added benefit

First assessment of a histology-independent drug / studies without control arms 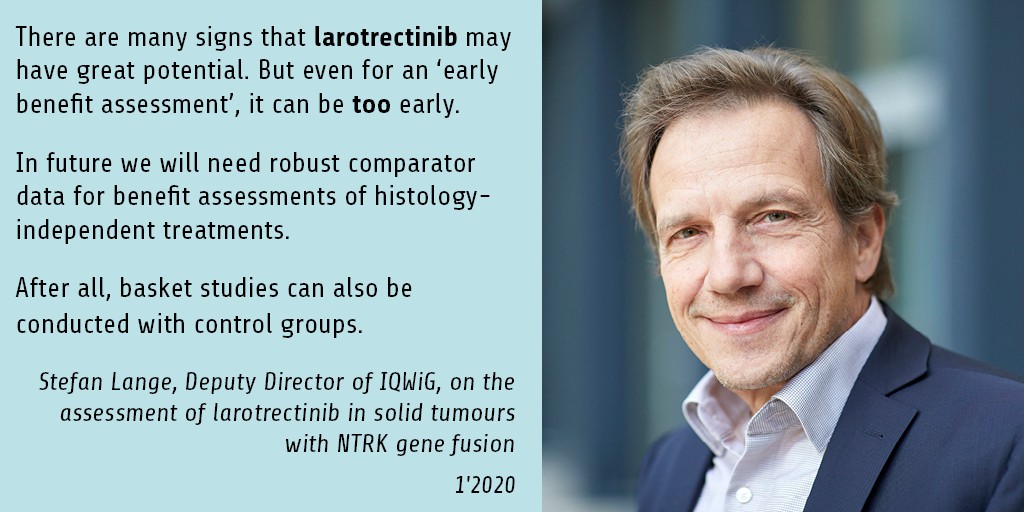 In the summer of 2019, larotrectinib was approved as the first drug in Europe to be used in numerous different solid tumours if the tumour tissue displays a so-called NTRK gene fusion. Since such a fusion of a Neurotrophic Tyrosine Receptor Kinase gene with another gene leads to increased proliferation of the tumour cells, the aim is to selectively block the corresponding signal pathway. The new inhibitor was approved for cases in which the disease is locally advanced or metastatic and there are no other satisfactory treatment options.

These cases are so rare that the approval studies – including a study in the so-called basket design, i.e. the testing of one substance in patients with different types of cancer – are rather small. In addition, none of the three phase 1 and phase 2 studies has a comparator arm, which makes it very difficult to conduct an early benefit assessment, as, by definition, an added benefit can only be proven in comparison with another treatment. Nonetheless, the German Institute for Quality and Efficiency in Health Care (IQWiG) has now investigated on behalf of the Federal Joint Committee (G-BA) whether the drug offers the affected children and adults an added benefit in comparison with the appropriate comparator therapy (best supportive care) – or, alternatively, in comparison with other therapies. The result: No conclusions on an added benefit can be derived from the study data and analyses presented by the company. An added benefit is therefore not proven.

Although its dossier did not contain any comparator data of patients treated with best supportive care, the manufacturer derived a hint of a non-quantifiable added benefit across all tumour types from the studies. The manufacturer based this conclusion on several effects that it classified as being so large (“dramatic”) that they can be used to derive a conclusion despite the lack of comparisons: The median overall survival of the severely ill patients was 44.4 months under larotrectinib at the last data cut-off; the time to progression in about one third of them was at least 5 times as long as under their previous systemic therapy; about one sixth of the patients achieved complete remission; and amputation of the affected limbs was avoided in numerous children. According to the manufacturer, symptoms and health-related quality of life also improved significantly in many patients, and the drugs hardly had any severe side effects.

Lack of comparisons and deficiencies in analysis of data

In exceptional cases, studies without comparator data may be sufficient for an approval if the aim is to show that the substance has an effect on the tumour. Explicit comparator data are needed, however, if the question is whether such an effect is associated with a patient-relevant benefit. IQWiG therefore tried to analyse also study data on other drugs for the 15 types of cancer treated in the studies – data, which the manufacturer itself partly presented in the dossier, but did not use. The Institute conducted these additional analyses separately for each disease, as both best supportive care and other treatments are tailored to the respective type of cancer and its stage: They are different for soft tissue sarcoma than for tumours in the brain or cancer in the lungs, chest or bowel.

Regarding the outcome “overall survival”, the differences between larotrectinib and other treatments observed so far were not so large in any of the cancer diseases that they could not be caused by systematic bias alone. Regarding patient-relevant outcomes from the categories of morbidity, health-related quality of life and side effects, there were no suitable data or no data differentiated by tumour type either for the new drug or for the comparator therapies, so that it was also not possible to derive an added benefit.

In addition, there are deficiencies in the histology-independent analyses presented by the company. Analyses were not prespecified and results were reported selectively. Thus, it was unfortunately also not possible to check the information provided on the avoidance of amputations in children.

“There are many signs that the drug may have great potential. But even for an ‘early benefit assessment’ it can sometimes be too early – this is the case when the data presented do not allow conducting meaningful comparisons,” says Stefan Lange, Deputy Director of IQWiG. “In future we will need robust comparator data for benefit assessments of histology-independent treatments. Basket studies can also be conducted with control groups that were treated with the best current treatment – which may well be best supportive care. Like the Canadians, who have recently denied regular reimbursement of larotrectinib, or our English colleagues, who are currently discussing the multiple challenges in the benefit assessments of these types of drugs in the British Medical Journal, we see the lack of suitable data as the main obstacle to making adequate assessments.”

G BA decides on the extent of added benefit

The dossier assessment is part of the early benefit assessment according to the Act on the Reform of the Market for Medicinal Products (AMNOG) supervised by the G-BA. After publication of the dossier assessment, the G-BA conducts a commenting procedure and makes a final decision on the extent of the added benefit.

Dossier assessment (German version)
BMJ publication „How should we assess the clinical and cost effectiveness of histology independent cancer drugs?“
Link to the Canadian decision

Further information from the G BA: