Concise example: Abemaciclib in advanced breast cancer. Data on quality of life, symptoms and side effects that were recorded for too short a time impair the early benefit assessment. 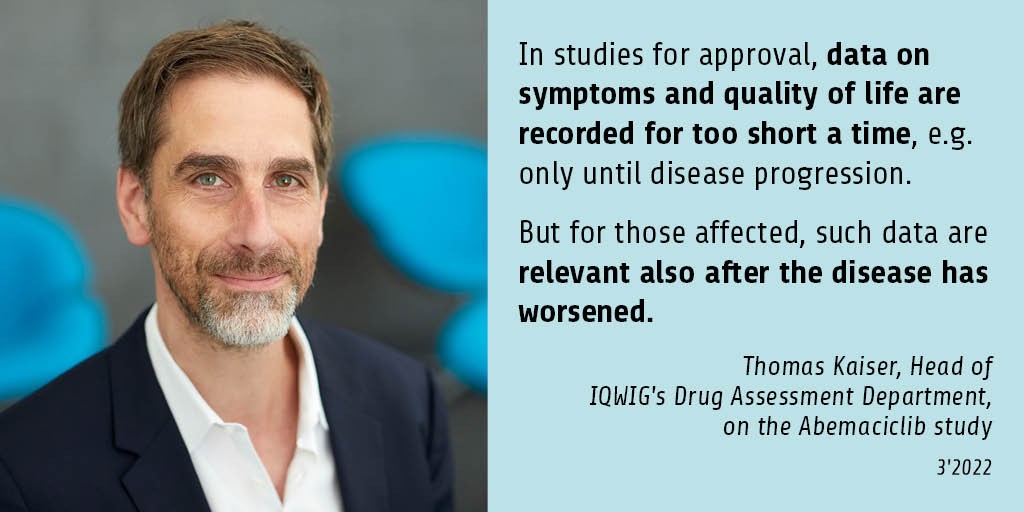 Abemaciclib in combination with fulvestrant is used for the treatment of postmenopausal patients with hormone receptor-positive, HER2-negative locally advanced or metastatic breast cancer. After the expiry of the limitation of a decision by the Federal Joint Committee (G-BA), the Institute for Quality and Efficiency in Health Care (IQWiG) has reexamined the added benefit - with mixed results.

In particular patient-reported outcomes (PROs) - i.e. patient-reported symptoms and health-related quality of life as well as outcomes on side effects - were observed for far too short a time in the studies on abemaciclib, so that conclusions can only be made about a small part of the entire observation period. This widespread practice not only affects the early benefit assessment, but also the decisions for or against further treatment options for the severely ill patients. Further methodological problems do not allow an interpretation of most patient-reported outcomes.

Type of metastases shapes the result of the assessment

For the first time, the manufacturer prepared the data of its study MONARCH plus separately according to the type of pre-treatment, so that corresponding data from two studies (MONARCH 2 and MONARCH plus) are now available for the assessment.

An added benefit over fulvestrant alone has not been proven for women who have not yet received endocrine therapy. If endocrine therapy has already been completed, there is a proof of a considerable added benefit in the case of visceral metastases - primarily due to a statistically significant prolongation of overall survival. However, survival of patients with non-visceral metastases is not statistically significantly longer with abemaciclib than without, so that the disadvantages in other outcomes shape the result here: There remains an indication of lesser benefit compared to treatment with fulvestrant alone.

For the third early benefit assessment of abemaciclib in this therapeutic indication - after 2019 and 2020 - data on the median treatment and observation periods in the relevant subpopulations of the two studies are now available for the first time. In both studies, the treatment duration is clearly longer in the intervention arm than in the control arm. Moreover, the observation periods for each of the outcomes “morbidity (patient-reported symptoms)”, “health-related quality of life” and “side effects” are systematically and significantly shortened, as they were only recorded during and shortly after treatment with the study medication. As the figure shows, these data cover only about a quarter of the median survival time. Study results must be interpretable

Such systematic shortening of the recording of patient-reported outcomes to the time of treatment is common in the studies that manufacturers submit in dossiers for the early benefit assessment - although not always as serious as in this case. It is particularly important when studies continue for a long time after the end of treatment (e.g. due to a progression of the disease or discontinuation due to severe side effects), because the participants often live for years.

The shortened and also unevenly long data collection time in the study arms severely limits the interpretability of the study results. For example, it is not possible to tell whether a worsening of the condition reported by those affected at the end of treatment is really permanent or possibly has subsided again shortly afterwards for the - very long - remainder of the study duration. In addition, a persistent worsening during treatment in the respective longer observed study arm (here the one with abemaciclib) is possibly

Weighing up what happens after treatment

In the course of their dossier assessments, not only IQWiG employees are interested in the further course of quality of life and symptoms after the end of treatment and progression, but also the affected patients and their physicians. Finally, they have to agree on whether and how to continue subsequent treatment, for which they want to weigh up, for example, a possible increase in life expectancy against impending impairments in quality of life. In the two MONARCH studies, too, a large proportion of the participants made use of at least one further systemic therapy after the end of treatment and observation.

Results on symptoms and quality of life relevant for patients

“The studies presented by the manufacturers in the course of AMNOG are often still strongly tailored to the approval", says Thomas Kaiser, Head of IQWiG’s Drug Assessment Department. “In such studies, data on patient-reported outcomes are recorded for too short a time, e.g. only until disease progression. But of course, symptoms and quality of life are relevant for those affected also after the disease has worsened."

Data on patient-reported outcomes that were recorded over a strongly shortened period did not provide answers to the question of whether patients do better or worse with a drug than with another treatment in the long term. For this reason, the time course of their condition must be recorded for as long as possible, i.e. until the end of the study. “Manufacturers must expect that data the recordings of which were artificially shortened will no longer be able to significantly influence assessment results in the future - not despite, but precisely because of the importance of patient-reported outcomes," as Thomas Kaiser points out.

The dossier assessment is part of the early benefit assessment according to the Act on the Reform of the Market for Medicinal Products (AMNOG) supervised by the . After publication of the dossier assessment, the conducts a commenting procedure and makes a final decision on the extent of the added benefit.

More English-language information will be available soon (extract of the dossier assessment). If you would like to be informed when this document is available, please send an e-mail to info@iqwig.de.