Because of new scientific findings, the manufacturer requested a new early benefit assessment. The latest data cut-off of the MAIA study now shows an advantage in overall survival. 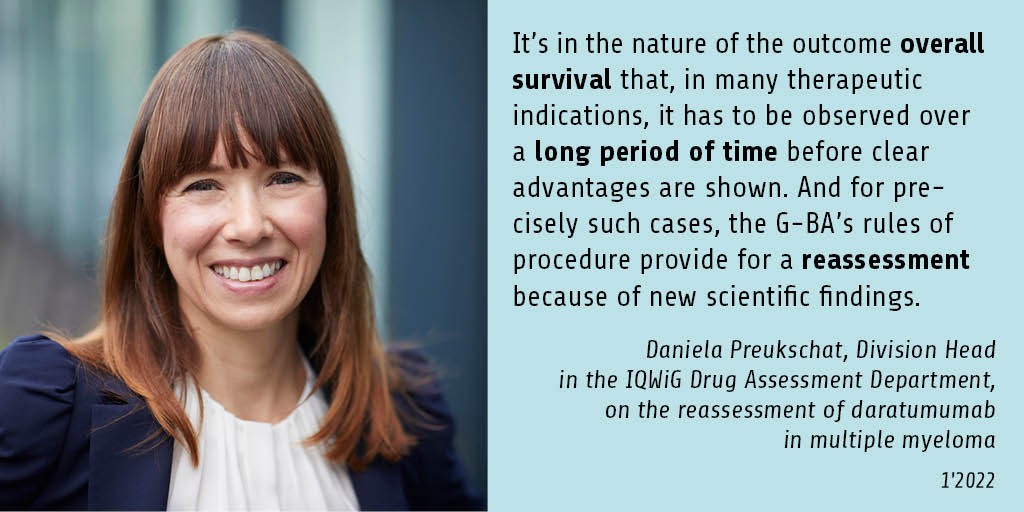 An early benefit assessment conducted by the German Institute for Quality and Efficiency in Health Care (IQWiG) in 2020 already addressed the question whether daratumumab in combination with lenalidomide and dexamethasone provides an added benefit in comparison with the appropriate comparator therapy to adults with newly diagnosed multiple myeloma (cancer of the bone marrow) who are ineligible for autologous stem cell transplant. That assessment showed a hint of a minor added benefit.

When the third data cut-off of the MAIA study became available in 2021, the drug manufacturer requested a reassessment because of new scientific findings. IQWiG has published the results of this assessment today. Its conclusion: There is still a hint of an added benefit of daratumumab in combination with lenalidomide and dexamethasone in comparison with these two drugs alone, but the extent of the added benefit is now greater, namely considerable.

It remains unclear whether autologous stem cell transplantation was in fact unsuitable for all study participants, as it is specified in the therapeutic indication for the early benefit assessment. This reduces the certainty of conclusions: At most hints, but no indications or even proof can be derived from the study data.

Survival advantage manifests itself as the study progresses

Whereas in 2020, the first two data cut-offs of the study showed an advantage in pain symptoms, neither advantages nor disadvantages were found in the important patient-relevant outcome “all-cause mortality”.

The third data cut-off performed in the beginning of 2021 changed this: Positive effects of considerable extent were not only shown for the symptom of pain, but also for overall survival. A minor added benefit was additionally shown in two scales on health-related quality of life, and a considerable added benefit in two specific side effects.

Negative effects, mainly with the extent “considerable” were only shown in some outcomes of the category of side effects.

“It’s in the nature of the outcome ‘overall survival’ that, in many therapeutic indications, it has to be observed over a long period of time before clear advantages are shown,” says Daniela Preukschat, responsible Division Head in IQWiG’s Drug Assessment Department. “And for precisely such cases, the rules of procedure of the Federal Joint Committee provide for a reassessment because of new scientific findings. Just like the first assessment, this reassessment has to be conducted on a complete data basis.”

The dossier assessment is part of the early benefit assessment according to the Act on the Reform of the Market for Medicinal Products (AMNOG) supervised by the Federal Joint Committee (G-BA). After publication of the dossier assessment, the conducts a commenting procedure and makes a final decision on the extent of the added benefit.

More English-language information will be available soon (extract of the dossier assessment). If you would like to be informed when this document is available, please send an e-mail to info@iqwig.de.