Haemophilia A and sialorrhoea: comparator therapies not implemented, added benefit not proven

Current standards of care were not implemented in studies

Two of the four dossier assessments that were published by the German Institute for Quality and Efficiency in Health Care (IQWiG) on 2 July 2018, and which deal with completely different therapeutic indications, have one notable thing in common: In both cases, an added benefit is not proven due to a lack of suitable study data, although there are randomized controlled trials (RCTs) showing effects of the drugs. The reason: Treatment in the comparator arms of the studies fell short of current standards of care and did not concur with the appropriate comparator therapies (ACTs) specified by the Federal Joint Committee (G-BA) for the early benefit assessments. 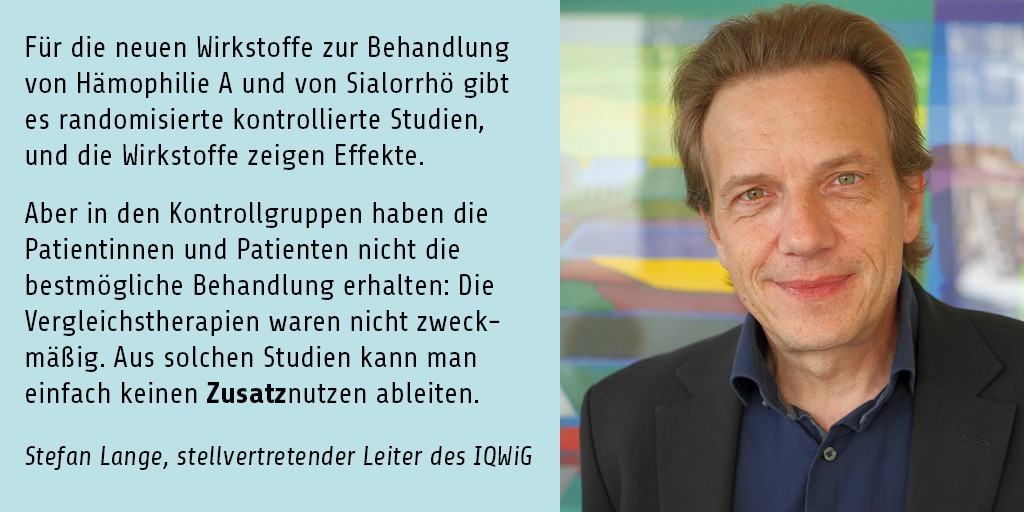 Emicizumab for haemophilia A

Haemophilia can be treated either with prophylaxis, or only if needed, for example after a bump or a fall. Emicizumab is the first monoclonal antibody indicated for routine prophylaxis in patients with haemophilia A with factor VIII inhibitors. Coagulation factors, in contrast, are used both for prophylaxis and as needed. Treatment with coagulation factors may cause the development of inhibitors, which requires modification of the treatment. A common approach is the use of so-called bypassing agents, which bypass the usual coagulation cascade and are therefore not affected by the inhibitors. Emicizumab also activates coagulation in a way that is not affected by the inhibitors.

The drugs used for inhibitors so far are injected intravenously, whereas emicizumab is injected subcutaneously once a week. Many patients therefore have high hopes for the new drug.

The drug manufacturer postulated an added benefit based, among other things, on a randomized controlled comparison between emicizumab and as-needed treatment with conventional preparations in the framework of the HAVEN 1 study. However, the had explicitly specified routine prophylaxis as ACT because, according to the current state of knowledge, this treatment has advantages over as-needed treatment. Hence no added benefit could be derived from the HAVEN 1 study. The indirect comparisons additionally presented were also unsuitable for this.

Children and adolescents with chronic neurological disorders such as cerebral palsy often have excessive salivation. Until recently, no drug was approved for this therapeutic indication in Germany. Therapies that help swallow the saliva can lead to improvements, however – these therapies include speech therapy and occupational therapy, for example.

The specified best supportive care (BSC) as ACT. BSC refers to a supportive therapy, optimized for the individual patient, for alleviation of symptoms and improvement in the quality of life. The manufacturer of the new drug glycopyrronium bromide cited two placebo-controlled RCTs and one further study for the postulated added benefit. However, it could not be inferred from the study documents that the children and adolescents received supportive concomitant treatment. No added benefit could be derived from the third study, which had no comparator arm, either.

“Let me start with a positive aspect: These examples confirm that RCTs can also be conducted in relatively rare diseases, and also in children and adolescents”, explains Stefan Lange, IQWiG’s Deputy Director. “And the new drugs showed notable effects in these studies. It is all the more regrettable that, even seven years after introduction of the early benefit assessment, the manufacturer dossiers still cite studies in which the control groups are not treated in compliance with the standard of care. The patients in the comparator arms of the studies did not receive the best possible treatment, i.e. prophylactic treatment in the case of haemophilia, and treatments such as speech or occupational therapy in the case of sialorrhoea. These kinds of studies are generally unsuitable for the derivation of an added benefit.”

G-BA decides on the extent of added benefit

The dossier assessments are part of the early benefit assessment according to the Act on the Reform of the Market for Medicinal Products (AMNOG) supervised by the . After publication of the dossier assessments, the conducts commenting procedures and makes decisions on the extent of the added benefit.

Further information from the G-BA: