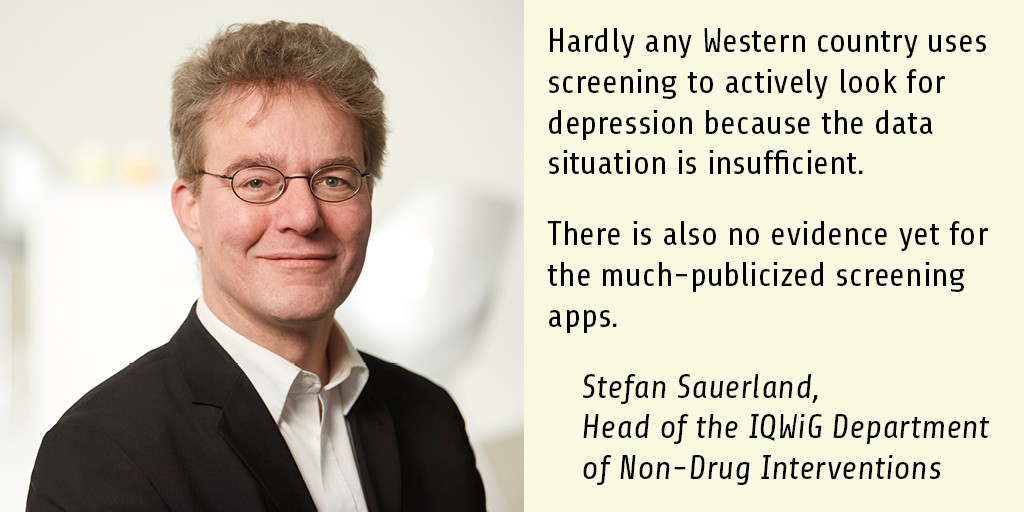 Almost 12% of all adults in Germany are diagnosed with depression at some point in their lives. The German Institute for Quality and Efficiency in Health Care (IQWiG) investigated whether participants in a screening programme could have advantages or disadvantages if their general practitioner, for example, offers regular tests based on a questionnaire that can reveal signs of depression. An advantage could be that the condition is diagnosed early on, making it possible to start treatment. The final report, which has now been published, confirms the preliminary results: Benefit and harm are still unclear. Hence there is still no scientific basis to introduce this kind of screening Programme.

In principle, screening can also be harmful

(Unipolar) depression typically occurs in episodes: Periods with few or no symptoms can be followed by periods in which symptoms, particularly depressed mood and listlessness, return or increase.

A benefit of screening could be that the disease is detected early and can then be treated better. This could prevent people with depression from withdrawing permanently from social life or becoming incapable of working, for example.

A screening test could cause harm if it shows a so-called false positive result, i.e. if it indicates depression without the person taking the test actually being sick. Such a test result could cause unnecessary psychological stress. The drugs, which are not actually needed, might cause side effects.

The researchers could use the same studies for the final report as for the preliminary report: No robust conclusions could be derived from the seven prospective intervention studies available in total. The results between participants and non-participants in the screening either did not differ at all or the differences were too small to be medically relevant. The results of the five studies conducted in Japan are hardly applicable to the German health care context anyway.

Stefan Sauerland, Head of the Department of Non-Drug Interventions, does not consider it contradictory that screening for depression is recommended by some committees and professional societies in the United States: “Hardly any Western country uses screening to actively look for depression because the data situation is insufficient.” He adds that the recommendation in the United States does not refer to screening alone, but to a comprehensive strategy ensuring that everybody with a “positive” test result can receive adequate medical care.

“Besides, no evidence has been provided yet on the benefit and harm of the currently much publicised screening apps”, Stefan Sauerland says.

In compliance with its usual procedure, the Institute had invited interested parties to submit comments also on this preliminary report, but had not received any comments.